I have toyed with that as one possible explanation for my year-long (!) absence from this here blog. If you like it, we’ll go with it. I have others. Like, um… Don’t pay the ransom! I have escaped!

I know it has been a while. I confess I have not fully kept up with events since my most recent post but I trust: President Clinton is doing great things for America; Mike and Dave Need Wedding Dates is still packing ’em in at theatres; Carey Price led the Habs to Stanley Cup victory; Canada’s antiquated “first-past-the-post” electoral system is dead; and, O.J. Simpson is continuing his dogged pursuit of the real killer.

Okay, I have been busy with a few things. I should, for instance, draw your attention to this, a creation of which I am rather proud. You still have time to check it out at 150 Elgin St.

I have also kept myself occupied by preparing my proposed class-action suit against Pete Townshend for authorizing nearly a dozen Who collections after the 2002 release of what was promised to be The Ultimate Collection.

It turns out there is no staff. That explains a few things.

The meeting did determine, however, that I have spent far too much time in recent months listening to this:

True, the song has been around for a while. Yet, it is somehow fresh every time. Not the tune itself, which is fairly wretched. And I know little about the cause. Yet, for me, the very essence of the musician’s life in the 21st Century is etched into those effortless fills the guitarist inserts during each verse.

He or she did not have to do that. The pay would have been the same if this veteran session musician had simply gone through the motions. Yet, something in the moment brought out a spark of what made him or her pick up the guitar in the first place. I’m guessing it wasn’t with the hope of one day playing on a session for a song that surely ranks among the most annoying musical impositions of our time.

Yet, this guitarist went that extra kilometre in the name of fleshing-out an anemic jingle. Something about that last gasp from a drowning picker speaks to me.

So that’s what I’ve been up to. I had meant to keep in touch. I assure you, dear reader, it was nothing personal. I hope you will accept my excessive use of exclamation marks in this post as a form of apology.

Really, all that was needed was a bit of inspiration. And this month, that inspiration arrived.

There it was, hidden among the James Last, Neil Diamond and Anne Murray LPs at a Value Village in Kanata.

“Review this record,” the worse-for-wear cover trumpeted, “and become a rock writer!”

Pretty cool, eh? An opportunity to become a “rock writer”? Yes, please. I enjoy a challenge. I mean, I’m no geologist, but I’m happy to review some rock.

(And that’s just the start! Or should I have said I ain’t no geologist…? Oh well, too late now: there is rock writing to be done.)

So let’s get to it, beginning with the four-track EP’s opener.

“I ain’t got no money,” Great White’s frontman refreshingly declares off the top of the bling-free rocker All Over Now. As a result, he continues, he ain’t got no “honey.” That correlative conclusion is the heart of this four-minute narrative. Essentially, the song appears to relate the story of a woman who had slept with the singer but of whom he has had enough. It seems she is not to be trusted and is rumoured to be somewhat promiscuous; though, we have only the singer’s word for that.

It’s rather catchy, in a Scorpions sort of way. Which means damn catchy! (Please forgive the language, but this is rock and roll.) Plus, the guitar solo is pretty boss, with some nimble fretwork accentuated by appropriate and timely use of the whammy bar.* There is also a clever nod to Bobby Womack’s song It’s All Over Now via the line “It’s your turn to cry.” (It may also be a reference to Lesley Gore’s It’s My Party.) Really, this song has got everything a hard rock anthem needs.

I see nothing preventing Great White from reaching a great height unless they, I don’t know, set fire to an audience or something.

Right, then, on to the next track: In the Fire by Hurricane.

Just try to not bang your head to this 4/4 anthem! (Actually, that applies to each of these songs… especially the 4/4 part.) The pounding beat and screaming guitars are the essence of fist-metal. (I just made that up!) Well, you also need a good riff, and Hurricane is onto a mighty good one here.

The singer is pretty pissed at someone — either a world leader or other authority figure, or perhaps a woman with whom he had slept but of whom he has had enough. (Possibly because she cannot be trusted and is rumoured to be promiscuous. Of course, I don’t want to put words in the band’s mouth here.) Also, the use of the whammy bar* during the solo is timely and appropriate.

So, on to XYZ, a band whose name implies a desire to be the anti-ABC. Sure enough, this song does not so much shoot a poison arrow as fire a cannon. To your heart! No worries, though. “It is,” the singer informs us, “a nice day to die.” It’s not made clear why that is; though, it may have something to do with a woman with whom the singer has slept.

The band chugs along in a reasonable approximation of Judas Priest, the guitarist making timely and appropriate use of the whammy bar* during a rather minimalist solo. As the song gathers momentum, hurtling metal-style toward death, the drummer gives it his double-bass-drum best, only missing the beat once during the fade. Mr Drummer, you rock!

So to the last song, by Dead On, a fierce-looking metal quintet.

The song is called Full Moon. And it sucks.

Okay, it doesn’t suck. But, you know, rock writers like to trash more songs than they praise. It gives them credibility, I think. And, um, you know, I was just trying to fit in.

Really, though, this song totally rocks!

Kicking off with an eerie howl, Full Moon wastes little time in proving itself to be the best and most metal contender among these four (blood) offerings. Little surprise there: the band has a coffin right in its name! (I could not find a coffin among the available fonts for this post, sorry.)

A fast and furious rocker finds the singer delivering rapid-fire lyrics that are pretty hard to decipher on first listen — which means he’s doing it right! The band offers an aggressive response to the frontman’s call during the chorus. “Lunatic!” “Psychotic!” “Apogee!” They shout, to snarled response from their leader.

Yes, apogee. Look it up. I did. These guys are both metal and literate.

That’s right, not only is this band metal but it also has a sense of humour. Hell, this song doesn’t even seem to have anything to do with a woman with whom the singer has slept. (Though I may be mistaken there.) Just good old extreme violence directed in equal measure at a random victim and society in general.

And then there is the lead guitarist’s use of the whammy bar*, which I would characterize as timely and appropriate.

I give Dead On five Devil signs.

(Damn! I meant to rate each song on a scale of one to five Devil signs. Oh well, too late now.) 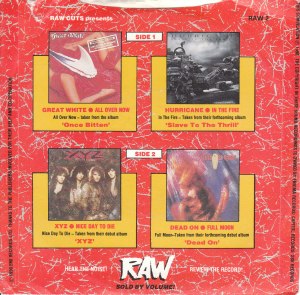 Okay, that is my first attempt at rock (read: rawk!) writing. It says here if I review this record I can become a proper rock writer and win stuff! Funny, though, I don’t see any mention of how I can win said stuff or to whom I should submit my rock writing. I can only hope someone at Enigma Records/Capitol Records/SBK Records reads this post and is sufficiently impressed to send stuff my way.

‘Til then, we play the waiting game. And for that, I am thankful to have my new metal companions with me. I suppose I could seek out the full album by each of these rock gods. But I’m good with the EP.

Wait, that’s why I haven’t written in so long. Let’s go with that.

*The whammy bar is an appendage electric guitarists use to add vibrato. In the metal world, you’re nothing without one.

One response to “on returning”