diarrhea of a Killer

Even for New York City, it had the feel of a special night. The Killer, Jerry Lee Lewis, in concert at the legendary country and blues bar Tramps, an intimate venue close to my heart — it’s where I first saw Neil Hamburger and last saw Dave Davies. It’s also where I once joined a full house to catch Buddy Guy play a lacklustre set, secure in the knowledge that most in attendance were present not to see the great bluesman but because Eric Clapton was known to be in town. And, naturally, Slowhand wouldn’t miss a chance to join his buddy Buddy, right?

Wrong. And I can hardly blame Buddy Guy for treating his audience with as little respect as they were treating him. That he at one point broke into a few bars of Sunshine of Your Love, while gazing somewhere stage right at a phantom surprise guest, was an especially nice touch on the master’s part.

But on this night, I was to be in the presence of a rock and roll pioneer. A man who, in his way, embodied every aspect of rock and roll better than any living performer. And as we arrived at the club, anticipation was high. That is, until we were greeted outside the locked door by a burly bouncer with a stack of papers in his hand. With few if any words, he handed one to each perplexed customer, even as he urged us to step away from the door.

And with that, we took a moment to read the words of the photocopied letter we had just been handed. It was an eye-catching item, not least due to the name of the sender, boldly printed above the text: George C. Nichopoulos, M.D. As in the infamous Dr. Nick, personal physician to the late Elvis Presley. Evidently, and to the surprise of all readers, Dr. Nick was still practicing medicine. Less of a surprise, perhaps, was the news that he remained personal physician to the Killer. (He would eventually, after being properly stripped of all remaining medical qualifications, stay on as Jerry Lee’s road manager.)

Addressed to Tramps manager Terry Dunne, the letter informed us, in rather graphic detail, of Mr. Lewis’s (“a patient of mine”) condition — diarrhea, “uncontrollable vomiting” and all. Nowhere did it state in so many words that the show would not go on, but the combination of the vomiting, diarrhea and laryngitis certainly implied as much. Say what you will about Dr. Nick: the man had a way with words.

Refunds, we were told or perhaps gestured, could be obtained at a later date. Now go home.

Wow, thought we, a personal letter from Dr. Nick! That, in its way, almost made up for the absence of Jerry Lee. I mean, seeing the man perform at Tramps would be cool and all, but… Dr. Nick! This, we shall treasure forever! Still, too bad about the show, particularly as, at the risk of sounding cynical, you know Jerry Lee probably woke up that morning, turned over, bellowed “The Killer ain’t goin’ to New York today!” and counted on his people to make up an excuse. 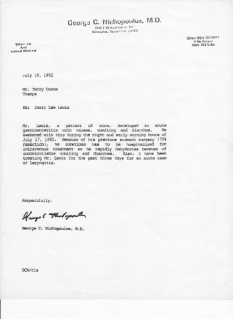 That’s where having someone like Dr. Nick on staff can come in handy. The good doctor never saw a line he was not willing to cross. Just ask Elvis.