“You can’t possibly listen to all of those!”

I think of that oft-repeated comment of my Dad’s each time I survey my record collection. Of course, said collection was much smaller then. Yet, despite my repeated insistence to the contrary, I must confess I do not listen to all of those records. I have LPs and 45s that have not been played in years — perhaps decades. Moreover, my record collection contains items that have never graced my turntable. Not once. Some likely never will. A few are still sealed.

And yet, only recently I added John and Yoko’s second Unfinished Music album to the pile. I have no intention of playing it anytime soon. If ever. And then there’s Bloodrock’s second album, the one with D.O.A. My earliest childhood memories include hearing that song on local radio and being rather terrified by it. I will never play Bloodrock 2, but it’s useful to keep your enemies close.

Sometimes it’s also useful to embrace an important-if-harrowing record like Rhoda’s 1982 single, The Boiler. Even if you’ll never play it.

The Boiler is an extraordinary song, recorded by former Bodysnatchers vocalist Rhoda Dakar with backing by members of The Special A.K.A. and produced by 2 Tone Records founder Jerry Dammers. Running to nearly six minutes, it is as unsettling a listen as has ever been committed to vinyl, as Rhoda narrates a harrowing tale of date rape. Denied widespread airplay, the song nonetheless nudged its way into the UK Top 40. This, despite Dammers’ own assessment that, “It is the only record that was ever made quite deliberately to be listened to once and once only.”

He has a point. I have probably listened start-to-finish to The Boiler only once, on a 2 Tone compilation. I have never played my 45. Yet, I consider it an essential part of my — indeed, of anyone’s — collection.

But be warned: You cannot unhear this song. Listener discretion is strongly advised.

Such is the power of music.

Today, one never-to-be-played record in particular is very much on my mind.

It was a garage-sale acquisition. Entitled Beauval Indian Boys, the 14-track LP from the early 1960s features inspirational and spiritual (as in Christian) songs performed by students of the Indian Residential School in Beauval, Sask. More than two dozen of the boys, ranging in age from six to 15, gaze at us hopefully from the front cover. Most are smiling; one or two look rather glum. Likely, those one or two caught the mood far better than the accommodating children willing to play nice for the camera.

It’s an obscure record, about which one will find little information online. One well-meaning attempt to describe its contents, on the entertaining blog Everyday Tourist, refers to the album’s liner notes as “compelling reading, hinting at (the boys’) struggles.”

A hint, perhaps. But the liner notes, penned by the choir’s conductor Paul Leroux, fall well short of detailing the true struggles of students at the Indian Residential School in Beauval, Sask.

Leroux speaks of the pride he takes in his students, and of their celebrated performances. He enthuses that these “ordinary Indian boys from the back bush of the province” have become “an asset to their community” by raising their voices — if only in song. “I like to think,” Leroux adds, “it will be so with the other Indians of this country when they will be given proper opportunity.” 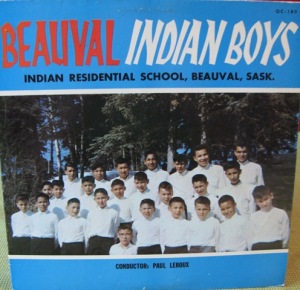 Today, we have heard details of how thoroughly, persistently and deliberately that opportunity was denied generations of children torn from their families and communities in the name of the Canadian Government’s ‘greater-good’ effort at assimilation. The goal, our forefathers may have claimed, was to bring ‘Indians’ into our European-tested and trouble-free modern world. Or, to put it another way, to remove a perceived impediment to progress and land by making it/them invisible. There was nothing noble or helpful about the residential schools program. There was only malice.

And as we in one of the world’s wealthiest nations reflect on this sordid legacy, we can perhaps also consider an existing system that permits if not encourages situations that routinely see our neglected First Nations endure lower rates of literacy and employment than the national average, and higher rates of addiction and suicide. “Proper opportunity” remains elusive. Our government is skilled at providing people and resources to engage in battle overseas; ensuring every citizen has access to clean drinking water, not so much.

As for the residential schools, it has been less than 20 years since the last of those shameful institutions closed its doors. Beauval Indian Residential School, first opened in 1895, remained in operation until 1983. And if the school’s name sounds familiar, that helpful liner-notes author Paul Leroux can take much of the credit.

In November 2013, Leroux was convicted on 10 charges related to sexual abuse of students at Beauval. A month later he was sentenced to a three-year jail term. Ten months into that sentence, he was granted full parole.

Last month, the Saskatchewan Court of Appeal, while overturning one conviction, ordered Leroux back to prison and belatedly increased his sentence to eight years, citing, among other concerns, “The fact Mr. Leroux had used alcohol to ply some of his victims and that these offences were recurring for some victims, sometimes over a span of years.” The appeals court also noted the trial judge had appeared to feel “Mr. Leroux’s public embarrassment at being charged with these offences (should) somehow count in his favour when it came to sentencing.”

So, yes, Paul Leroux knows better than most of the struggles his former students faced — and will continue to face. And if three years, or even eight, sounds like insufficient punishment, consider that Leroux did receive a 10-year sentence when convicted of the sexual abuse of boys in Inuvik, NWT. Of course, that was in 1998 when, presumably, judges took such matters more seriously. This time around, Leroux insisted “it’s unfair to use today’s standards” when considering his past actions and their consequences.

A victim, meanwhile, told CBC News following the 2013 trial: “It doesn’t matter what he gets. The damage is done. He has stolen many years from us.”

We owe it to ourselves to study the findings of the Truth and Reconciliation Commission’s years-long investigation into what it has termed “cultural genocide.”

Be warned: We cannot unhear these stories.

Here’s hoping, though, they generate a continuing discussion that will influence not only actions but attitudes. This is a shameful chapter in our nation’s history. And while the schools may be closed, the matter is anything but. The Truth and Reconciliation Commission’s report is, ultimately, a beginning rather than an end in itself.

Which brings me back to the doomed optimism displayed on the faces of those Beauval students. That record is now over 50 years old. Yet, it could hardly be more contemporary. It is likely some of those boys/men died too young. It is possible some of the living envy them. I cannot help those boys. I do, however, know how to care for an LP; I can do that much for these children. And for me, I can continue to study those smiling faces and to never forget the tragic reality they disguise.

Hmm… if you’ll excuse me, I think there’s a record I need to listen to. Though I know I cannot unhear it afterward.